One of THOSE Moms

The best parenting advice I ever received came from some older cousins who already had 2.5 children. They said: Never say that you will NEVER do something as a parent--because you will.

I have thought of this many times when I did things I said I'd never do, like hold a baby while on the toilet (They can get by without me for a minute, can't they? No.) or be the mother of a biter (Only really bad parents have children who bite, I thought.) or yell and dig my nails into the chair during a game for a kid who knows so little about sports he thinks the Buckeyes should play the Bengals (no comment about which team would win). 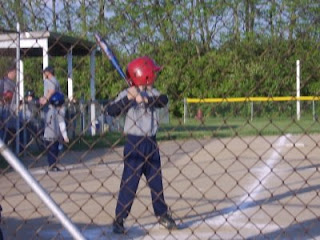 I managed to keep my cool during the whole season of Ryan's coach-pitch baseball team. I only yelled encouragement and tried to keep quiet most of the time, lest I become one of the THOSE Moms. You know who they are; the ones who keep a constant stream of chatter throughout the game--the ones whose own kid is really the best. 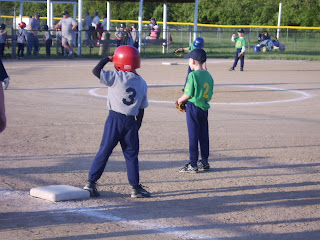 But then Ryan's team won their first tournament game by a nail-biting two runs and all my thoughts of never went out the window. I went through the whole season not even encouraging my son to discuss whether he won or lost, but suddenly I was the mom on the sidelines keeping the other parents abreast with unofficial score keeping.

The second game wasn't as close but as all those boys continued to play so well and make such good plays, I was overcome with emotion. Fortunately, I also had sunscreen in my eyes to blame for the the occasional dab at the cheeks. 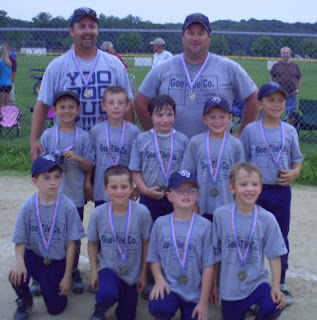 When they won their third straight game--and the coach pitch championship--you'd have thought we were parents of Olympic Champions. We were whooping and jumping out of our chairs. 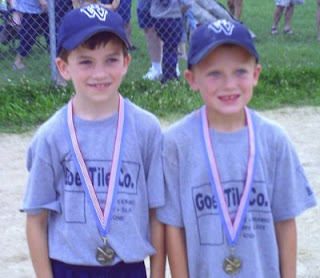 So congratulations to Ryan and his cousin who felt the taste of victory this summer.

Soon I'll be on to my next never. I said I would never subject myself or anyone else in the family to an eight-hour dance recital for a kid who can't spell ballet--I'm sure I'll eat those words soon too.
By Holly Michael, APR at June 30, 2009