PR Idea of the Week

Egads! Before I become a complete Mommy blogger (not that there's anything wrong with that), I thought I would get back to the third element of this blog and share an interesting PR campaign.

The marketing/PR/social media team at Discovery Channel has hit a home run in promoting Shark Week--by "killing off" most of the nation's TV bloggers. Put down your logo folder and back away from your USB drive PR people, because the press kit for Shark Week includes mangled surf shorts and a customized obituary for each recipient. 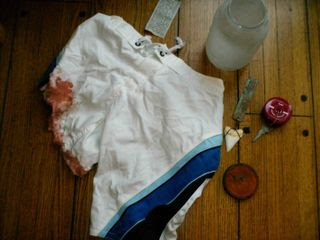 Here's a photo that's been shared on multiple blogs with the contents of the kit received by James Hibberd, blogger for The Hollywood Reporter.

There are several good blogs deconstructing this campaign but by far the best quote--and best takeaway from this press kit--is from Hibberd's blog.

"I love it, I think it's great," says one PR executive at an unrelated company about the Discovery campaign. "And the reason I love it is because you're writing about it."

It DOESN'T MATTER that the headline of Hibberd's story is "Creepiest network marketing effort ever?"

Peter Ha from CrunchGear, who also suffered a tragic shark-attack death at the hands of Discovery, similarly photographed and documented his experience with this press kit. And Sling went as far as to offer their free suggestions for other shows who might be looking for edgy press kit concepts. (I know it's a cliche but I literally LOL at the one for Hoda and Kathy Lee.)

A few years ago (a few months ago?) if you asked journalists at a media panel what they think about getting clever PR stuff in the mail, they would mostly say that they don't like it and you should just email them a solid story idea. BUT the definition of journalist has changed as well as the opportunities to go viral by appealing to vanity (Pepsi told recipients of their campaign they were among the top bloggers in the nation), and the fact that people are looking for cool stuff to post online.

You have to think that there had to be naysayers at Discovery who thought that the obituaries were tacky or that the bloody shorts were too scary, or that they shouldn't be promoting shark attacks since they are so rare and it undoes years of science education--all good points.

But if their goal was to get blog hits and people talking blogging and tweeting about Shark Week--then they were a big success.
By Holly Michael, APR at July 11, 2009