Sweet Babies of Summer (and Teats)

Somewhere along the line Husband acquired a sow in his pig herd named Holly. Insert joke about me here ____.  Since almost all daughters are named after their mothers, we now have a number of Hollys running around the place eating whatever she can find, making a mess and cranking out offspring. Also, the hogs named Holly are here too. 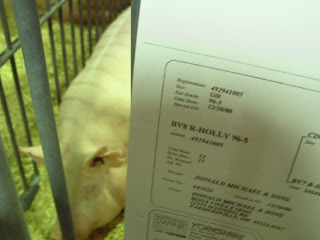 At least the Holly pigs are of high quality. Here is one Holly who made the cut for the State Fair last year. See her official registration paper with the Yorkshire Club, officially naming her Holly 96-5.

Earlier this week, we welcomed a few more Hollys to the farm. After viewing this video, Husband dared me to title this post: Holly's big tits, however, I don't need that kind of search engine traffic.


Mother-to-mother, I applaud Holly the pig for her devotion to lactation and congratulate her on nine healthy babies.

And don't worry about me being offended by my namesakes. I enacted revenge on Husband years ago by renaming some of his pigs after the pet name I have for him. Boo the Hereford boar went on to father several state fair champions--and had his name announced at the fair each time!
By Holly Michael, APR at August 16, 2011