My Cup Runneth Over

I didn't drink any green beer on St. Patrick's Day. I didn't go to a bar but I did spend time with a wee little guy, however, this post is about what I did with the kids today.

Eight years ago, the day after a rare March snowstorm, I cranked out my second baby before noon and barely broke a sweat. Since we held his party on the night before St. Patrick's Day this year, Justin had a free agenda for his Saturday birthday.

The day started and nearly ended with a marathon Monopoly game, in which no matter how much I tried to bankrupt myself by buying more houses for Pennsylvania Avenue, I kept afloat. Once Justin lost everything on my green properties and Ryan amassed a $32+ million fortune, we finally ended the game.

Then, since six hours of Monopoly wasn't enough to break me, I took all three kids shoe and athletic cup shopping. At one point, when Ryan was in the sporting goods store dressing room trying on underwear--actually a padded short thing for baseball--the door popped open for me to check out the fit and Morgan ran in,  grabbed the removable cup and had it pressed up against her knee before I could stop her.

While I whispered to Morgan, that is for the pee-pee, Ryan was supposed to be taking the thing off and putting the cup back in for purchase. When the door popped open again, I saw he had the cup in sideways, giving a very interesting silhouette to these size M youth pants. 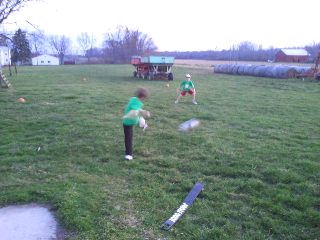 Once we were back home and dinner was over, it was back outside for these farm kids for their daily three-person farm yard kickball game. In case you want to play at home, remember, the gravity wagons are a home run.

While I didn't imbibe on this popular drinking day, in so many, many ways my cup runneth over.

Email ThisBlogThis!Share to TwitterShare to FacebookShare to Pinterest
Labels: kids