I do an unbelievable amount of research for each of my blog posts. And in researching this one, I discovered that my extreme level of non-hipness reaches all the way down to the level of thinking that Will Smith's 1998 rap hit was "Gettin' Funky with it." Also, I thought this was a recent tune. And I almost spelled rap with a W.

My extreme whiteness established, I do want to talk about a new miracle product that entered my life recently called Funk-Out. The good people at Funk-Out thought just maybe that a farm wife like me might be dealing with some funk (disclosure of product gratis). 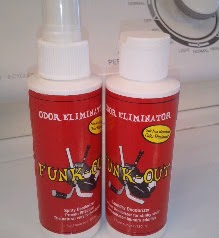 Of course I have a lot of funk that I want out! I'm married to the freakin Octo-Farmer for heaven's sakes.So I tried it out.

The first test was of the Funk-Out Spray Deodorizer, which I sprayed into the bench of our hall tree, which over a year ago was the home of some very moldery corn hole bags. Yes, many are made with real corn! The stench was impervious to Febreeze but a couple sprays of Funk-Out and I already notice a difference. If I ever bothered to really pull things out and spray deeply, I could knock this thing off. Or we could continue to deal with snow pants that stink like zombie armpits.

My second test was the laundry deodorizer. This was a test for me as much as it was for the product. My current laundry regimen consists of dirty clothes + Tide Free + turning on the dial = laundry. There are no rinses, no fabric softeners, no bleaches going on. Could I figure out how to use that container in the middle of my washer to add something to the rinse cycle? YES. I. COULD.

I successfully added Funk-Out to two loads of Husband's funky laundry--one from our pig auction and another load that included damp farm laundry that had been sitting around for a day. Both loads produced laundry that smelled like... NOTHING. My favorite laundry smell.

The number of things marketed specifically to farm wives consists of pink John Deere shirts, rubber boots with flowers on them and maybe wide-hipped Carhartts. While I would add Funk-Out to the list, I will also say that the Funk-Out people have more test results on sports equipment. With two active boys, I see a day when I may be spraying both boots and jocks with this stuff.

Thanks to Funk-Out, I may soon be calling Husband The Fresh Prince.
By Holly Michael, APR at May 05, 2012