Yesterday we gave my father-in-law dirty socks for Father's Day. It wasn't our original intention.


First, in our defense, my father-in-law is very difficult to buy for. He's not very technologically savvy, so gadgets are out and he's a farmer, so aside from a few to wear to church, ties are out too. I did try to do an experience gift at Christmas but the Segway tour of Downtown Dayton went unredeemed (damn impulse Groupon).

Anything else he wants he buys for himself, so we have to stick to needs for gift-giving. I REFUSE to purchase underwear as a gift for anyone (Thongs are the exception. You were wondering how I was going to work in a thong reference, weren't you?) Hence the socks. 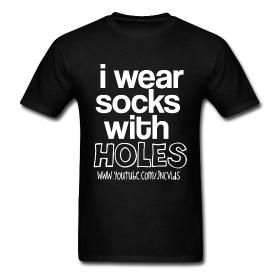 If there was an Olympic event for sock wearing-out my father-in-law would win, so much so that he'd be under Lance Armstrong-like scrutiny for cheating. He loves to tell the story about how when he was young the local dry goods store had a guarantee on socks. If you wore their brand out inside of six months, they would give you another pair. He claims his Dad didn't have to buy him socks for years. Anyone who has ever seen my father-in-law without shoes has also seen the better part of his heel--much to my mother-in-law's dismay.

So we buy the socks. Two packages of Nikes.

Father's Day Sunday morning arrives and after doing an hour of work outside, Husband rushes in to change for church. He needs a pair of socks. We quickly decide that we'll keep one of the pairs designated for his Dad, then take them out of the package later, so he doesn't know how many he was supposed to get.

We live next door to my in-laws. That's a whole different post--about the wonderfulness of it, of course. Husband decides to put all the socks in a shoe box along with the tire gauge we got his father. Husband makes the executive decision not to do any wrapping, or even tape the box closed.

Then he decides to hand this package over to our eight-year-old to carry next door. No sooner do we get out the door then we see Justin out in the barnyard with a stream of gleaming white socks spilling out of the shoe box into the rocks and grass.

Somehow this is the funniest thing I have ever seen. I am paralyzed with laughter while Husband is on the ground glaring at me while he picks grass, sticks and dirt off his father's socks. And then it starts to rain. We were so happy for the rain that all of us kept walking, me still giggling. When we got almost to their house we realized my in-laws weren't home.

Husband proposed that we just drop off the now-damp box. I said, Do you really think it's a good idea to take a wet shoe box of dirty socks and just leave it on the kitchen table. Does that say Happy Father's Day to you?

So we decided to return later. My father-in-law LOVED his new socks and overlooked the last piece of dry grass stuck to the heel of one sock.

He only hoped he'd have one pair without a hole left to wear tomorrow.

Email ThisBlogThis!Share to TwitterShare to FacebookShare to Pinterest
Labels: husband