Last week I accompanied Husband to a trade show for his job. We stayed at a posh resort in Arizona and I lounged by the pool while he went to meetings. HA! Actually, Husband, Ryan, Justin and I drove 10 hours in our pick-up truck to the World Pork Expo in Des Moines, Iowa, with a trailer full of pigs.

I decided to time-delay my posts on this event for the safety of our farm, and because I wouldn't want someone to haul off our VCR tape collection.

To start from the beginning, check out the thong-a-riffic World Pork Expo - Day 1.

By day two all 2,100 pigs in the barn had managed to poop 20 times each. And if you do the math, you'll realize that you'll never want anyone in my family to wear their shoes in your house again. 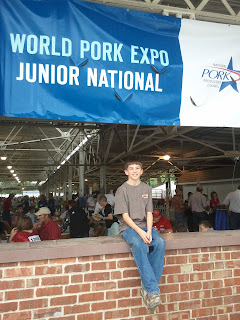 Ryan and Justin were participating in the World Pork Expo Junior National, a show put on by the National Junior Swine Association. (Membership is free, in case you know of any young people looking to build their resume.) 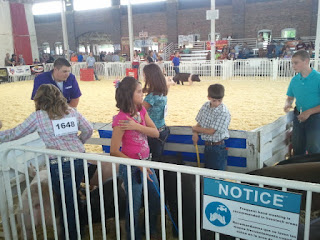 In addition to showing their Hampshire barrows (black and white, castrated males) on Day 1, Day 2 included a show for their Yorkshire gilts, plus a show that measured the skills of the kids in showing the pigs. Showmanship.

Above, you see Ryan preparing to enter the ring for his showmanship class. 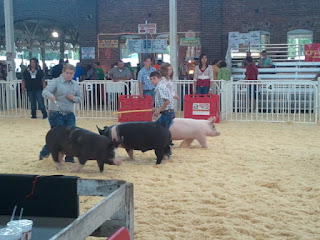 The competition at a national show like the World Pork Expo is fierce (700+ kids from 26 states). As the reigning junior showmanship champion at our county fair, even Ryan had a tough time getting placed. 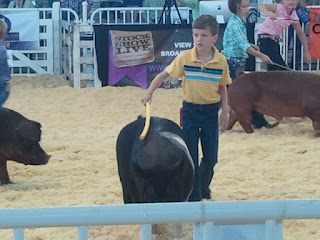 As did the reigning reserve champion pee-wee showman from the local fair. Both boys showed well but didn't make the cut. 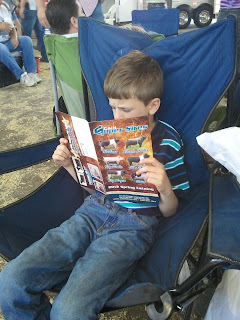 After showmanship was over, we headed out for MORE free pork for lunch. And thus began the wait. Showmanship started at 8 a.m., so we were up by 6:15 and in the barn by 7 a.m. After this early morning a looooong afternoon and evening waiting to show again was exhausting. The pigs entertained themselves by pooping and then lying in it, causing Husband and Ryan to give them repeated wash downs.

Justin kept busy by reading boar stud catalogs. This is a catalog, like any other, with the main exception that the product is pig semen. Yes, we allow our eight-year-old to peruse semen catalogs.

I occupied myself on my smart phone and decided to check out the twitter traffic around this event and then HOLY HIJACKED HASHTAG, Batman, I saw that vegan activist groups were using #NPPCWPX to further their agenda of banning pig gestation stalls. Full disclosure: This is technology that we don't use on our farm because the volume and type of pigs we produce wouldn't justify the investment.

There is a very balanced take on this issue on CNN (timing probably not a coincidence), that I encourage you to read.

On a serious note, I understand the benefits of gestation stalls--for both farmer and pig--but I think that the swine industry is coming to terms with the concept that we need to move on to a different way of handling sows.  I do think that consumers need to be careful and think critically about taking guidance from people who ultimately want to eradicate your meat eating options altogether. End of serious note. 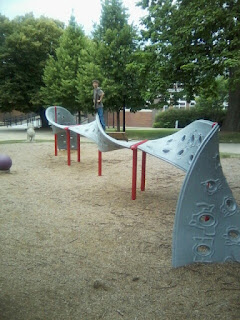 After that dose of swine industry social media/PR, I left the barn (blasphemy!) and wandered around the gorgeous Iowa State Fairgrounds. I discovered a fun playground park hidden away behind the barn. We had the place to ourselves when I managed to drag the boys away from the barn for a little while. Even Husband joined us.

Once they started showing the Yorkshires in late afternoon, we still had to wait for class 12 where both gilts were entered. Gilts show by age; ours were born last November, making them among the older pigs in the barn.

The boys were FINALLY called to show their pigs about 9:30 p.m.. After all that wait, the best we did was 10th place. Fortunately, we had another show on Day 3 and an auction on Day 4 in which to redeem ourselves. More on that later.