The Valley Recap: Yes, This is Really Happening (S1:E1)

Did you know that Dayton has its own reality show? It’s called The Real Housewives of Sherwood Forest. Ha! Just kidding. The show is actually called The Valley, brought to you by the same Dayton TV casting geniuses who developed Living Dayton.

Unlike Living Dayton, which promised a show with locally grown hosts, and then launched with two dingbats who had once been to Columbus, The Valley does seem to have real people from Dayton's nicer suburbs in it, so far.

The Valley follows “the journey of six high school graduates from the Miami Valley as they prepare for the next big step in their lives,” according to Dayton’s CW website.

The cast includes:
Ally – “I love alpacas.”
Chris – Made it through the first episode without showing his abs.
Stephanie – “Dayton has no traffic or Hispanics.”
Donald – Oh, we probably should have a black guy.
Alexys – So. Much. Drama. in the previews.
Nathan – “Hi, I’m Nathan, from the country.” 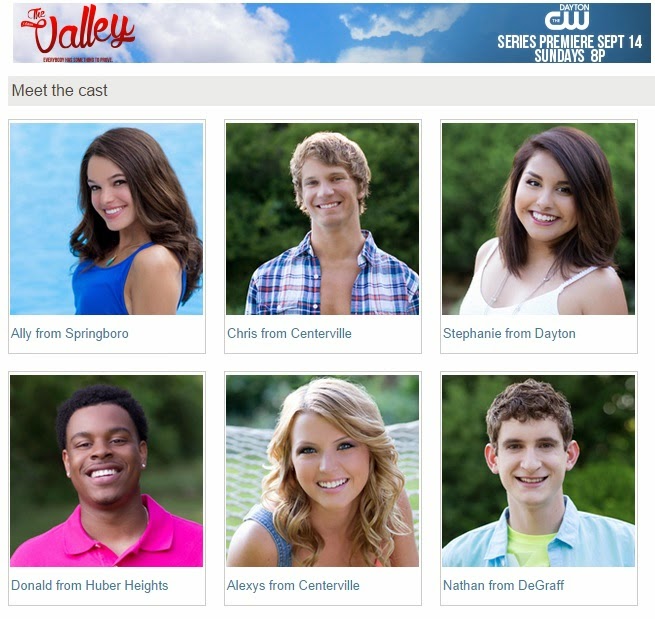 Let’s all awkwardly meet for the first time at Riverscape.

Chris and Alexys, both Centerville HS grads, arrive together and immediately get asked if they are a couple. “We would never date,” Chris says quickly. “We have zero compatibility.” Yeah, we’ll see.

Theme song, “Do you have what it takes…” To live in Dayton? To be on a locally produced reality show? To make it through a whole season watching?  I guess we’ll find out.

First (non-Dayton) adventure: Camp Kern.
Everyone except Alexys is afraid of the zipline. Nathan gets to talk for two more seconds and is done for the episode.

Second adventure: Planet Fitness
Chris and Donald work out together. Chris is a gym rat. Donald is a normal person.

Third adventure: Human RaceTheater
Ally brings her guitar for a session with some guy from NY who is only in Dayton for two weeks. Talks about her dead Dad, plays a cool song. NY guy, wanting to talk music: “Tell me more. Tell me things.”  Ally: “I love alpacas.”

Money shot of Carillon Park.  Then five minutes of previews. Lots. Of. Drama. In the coming episodes. Stay tuned. Sunday nights on Dayton’s CW or just come here for the recap.
By Holly Michael, APR at September 15, 2014