A Geek Squad double agent was dispatched to our farm today. And I love him. Although, now that I think about it, a double agent works at cross purposes to the agency he appears to support--so as a true double agent, he should have been trying to put MORE viruses on my PC.

He arrived ON TIME in his cute little Geek-mobile. According to the Mission Details that he left behind in his Field Agent Communique, he removed 12 infections and had to run a few extra programs to get rid of a pesky trojan. Those trojans CAN be difficult, and unreliable. 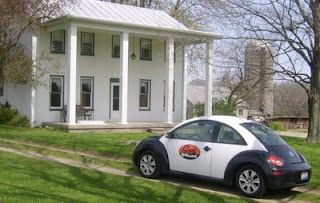 While he couldn't pinpoint the exact source of all the bugs on my computer, he did have some tips on system performance and online safety. Chiefly, he told me to ditch McAfee as soon as possible and get Norton 360 or Webroot Spysweeper with Anti-virus. It ticks me off to learn that McAfee can only cure the computer equivalent of an ice cream headache, especially since Dell suckered me into a multi-year deal with them.

His other great piece of advice was don't have a million icons on your desktop. It slows down performance since it has to repaint each one every time you minimize a program. This makes sense and I have already done it. Why did I have the photo of the guy from the testicle festival on my desktop as an icon anyway? 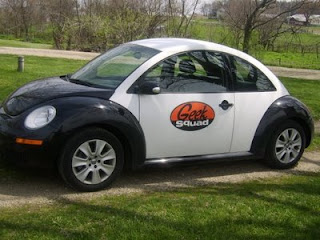 So the saga of Holly's virus-infested computer is over--Case Closed. I'm sure you're all tired of hearing about it. Here's a final question: How did a woman with a broken computer get online to complain about it so much? Maybe I am the double agent.