Let me take a moment to suspend this blog's regularly scheduled gentle teasing of Husband to point out admiringly that he just completed a five-day, 1,166-mile trip with two boys and seven pigs.

Last week he loaded up our beautiful aluminum trailer with his finest Yorkshires and headed out to Des Moines for the World Pork Expo. 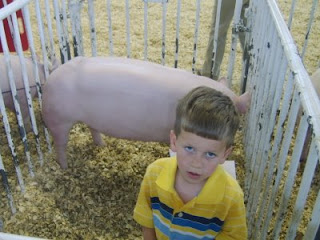 Not only did he care for a selection of pigs and 2/3 of his own offspring, Husband, the man who is genetically predisposed to take six photos on a weeklong trip to Disney, TOOK SEVERAL PHOTOS. 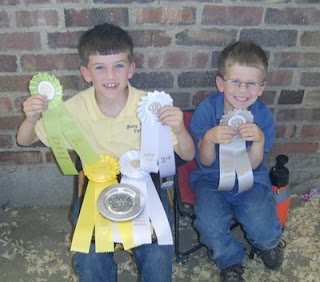 In addition to showing his barrow and gilt for ribbons, Ryan participated in a number of contests on his skills as a junior swine farmer. He won fifth in his age group of more than 100 kids from 48 states and two countries. Justin and his Yorkshire gilt won a lovely silver ribbon too. 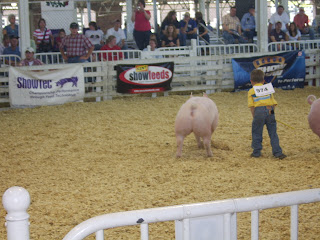 Here is Justin showing his Yorkshire gilt. The goal of pig showing is to get your pig in view of the judge multiple times. Unfortunately, both the judge and the pig insist on walking around the show ring randomly. Your job as a pig exhibitor (well not your job, actually) is to use a plastic pipe or wooden cane to gently tap the pig and steer it in the direction you want, to maximize viewing by the judge. Of course, 250 lb pig + 40 lb kid = things not always going as planned. 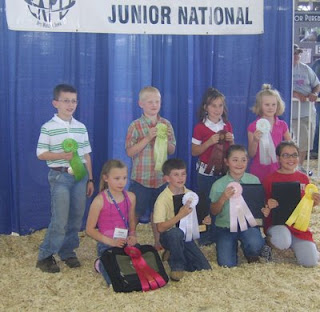 Ryan and Justin both did a great job, but it was all due to the dedication of their father, whose only slip-up was coming home with seven boys and two pigs.
Truthfully, he managed this huge trip with incredible calm and organization. The World Pork Expo doesn't give out ribbons for that--but they should.
By Holly Michael, APR at June 11, 2009