And That's When the Fight Started...

I was very tempted to call in but like so many of the stories I want to tell about my home life, my most recent and that's how the fight started story requires agricultural definitions, explanation of rural culture and possibly a quick refresher on the birds and the bees.

Husband showed up to a farmer meeting a few years ago and was put in charge of procuring awards for the Champion and Reserve Champion Yorkshire gilts at the Ohio State Fair. A position, I am finding out, that has the same term of office as U.S. Supreme Court Justice--forever.

So now husband is in charge of ordering the annual awards. The first year I stayed out of it. The kids who won with their prize Yorkshire pigs got a check in the mail after the show was over.

The subsequent years I got involved and we ordered embroidered lawn chairs (they still got a check), which are a very popular way for kids to brag about their accomplishment when they bring the chair to the barn at the next show.

This year, after scoping out the award chairs kids were bringing to the shows, I got crazy and decided to order a chair with a pig embroidered on it. 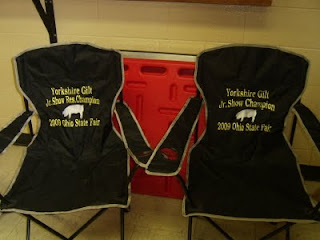 Yorkshire pigs are all-white (pink) pigs that have ears that stand up. Note that other breeds of all-white pigs have floppy ears that hang down--this will be important in a second. Gilts are female pigs that have not been bred--or at least that's what is implied by their purity rings. 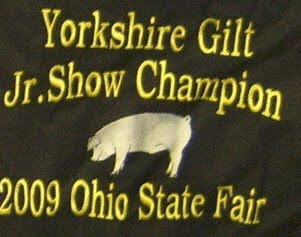 The pig is actually white. This photo doesn't do it justice. That part I got right. One big problem is that this pig has a wee-wee underneath. He's a boy.

Also, look at those ears. THEY ARE POINTING DOWN. THE CHAIR IS RUINED. HOW COULD WE GIVE OUT THIS ATROCITY?

And that's when the fight started.

In my defense, I ordered the pig sight unseen from Friendly Suburban-Dwelling stitchery ladies who only knew that I specifically asked for a white pig that was NOT a cartoon. I figured discussions with them over the phone of Yorkshire breed characteristics and gender indicators would really be too much. It's a representation, not a photo.

I had also forgotten to have them sew Yorkshire gilt on there so what we had was a chair that said: Jr. Show Champion
[image of male pig not of the Yorkshire persuasion]
Ohio State Fair

I fell on my sword and offered my resignation as Special Assistant to the Farmer Who has to Acquire Awards for the Ohio State Fair Yorkshire Show. Fearing that he may lose a valuable contributor to many of his agricultural endeavors, he got in the car and drove the chairs back to the stitchery ladies to add the missing words.