When you live on a farm that last made a fencing purchase in 1972, sometimes the animals are able to escape. Most times, Husband deals with the escapees on his own, my only evidence of wandering cows the "pies" they leave at the back door. 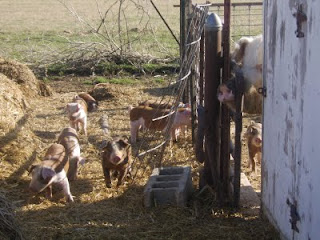 Sometimes the little escape artists are so cute you just have to watch them explore the big world outside their pen. This is cuter to me than my in-laws who have to shoo little pigs out of their garden and flower beds.


One time we came home from being gone all day and saw suspicious manure/mud wiped on our back door. Apparently, the pigs had escaped from their pen, leaped into the nearest puddle, and then decided to pay their respects to the farmer and his family.


This past summer Justin and Morgan ran in the house to breathlessly report that there were cows in the barnyard. Only half believing them I walked outside in time to see a herd of mature Ayshires dashing down our gravel driveway toward the road. Husband raced past them and turned then back toward the house, and they stampeded right past us again. After detouring through my father-in-law's garden, they eventually returned to their barn. 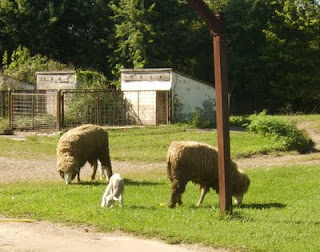 Sometimes the animals are loose by design. These ewes (mother sheep) are grazing near Husband's old basketball court by the pig pens. Ah, the old basketball court by the pigs pens--isn't that where most kids learn the sport? Anyway, the sheep are there because Husband's father let them out. Now that I think of it, I'm not sure why. I guess he figured the ewes wouldn't wander far without their lambs.

Yes, most women have a lot to worry about when the phone rings in the night or the police knock on the door. But farm women have one more thing on their mind--broken fences.
By Holly Michael, APR at November 08, 2009