Ghost of Christmas Past

Earlier tonight we popped our pine out the front door. And while Husband and I crawled around on the floor picking up stray needles, I wrote this blog post in my head.

Every year when I get out the Christmas ornaments, I find one I should have thrown away long ago. Sometimes I let it go on the tree, my children unknowingly placing this bad memory on display. I secretly defy the angel to look around and see how great Christmas is for me these days. 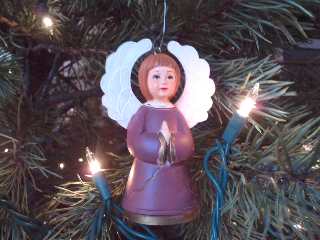 A middle school girl has a crush on a boy. He's a jock and not really interested in icky girls. She's a huge nerd with a bad perm. She doesn't keep her crush quiet. He is NOT interested--people probably tease him about it.

The class holds an ornament exchange and the boy draws the girl's name. She can tell this by his reaction. His mortified reaction. Twenty-five years later she can still see the look on his face when he realizes he has to buy a gift for the girl who had been making him miserable with her attention.

When the day of the ornament exchange comes the boy is not in class. He did not come to school that day at all. The girl still received a box, obviously wrapped by the boy's mother. Inside is the angel ornament.

For some reason I kept the ornament. I kept it in a red box under my twin bed in the room I shared with my little sister. I kept it while I was in high school and moved on to other boys--boys who appreciated my attention. The angel stayed behind while I went to college and then moved to my home after I got married.

The boy and I still live in the same small town. Our children played on the same ball team. Sometimes we give each other a hello nod. Once when I was attempting to run on the bike path I passed the boy and held my breath so he wouldn't see me panting.

This year my children grabbed the angel out of the box and placed it on the tree before I could hide it. Every time I see that angel I can still see the teacher bringing me the carefully wrapped box that his Mom had delivered before class, the card so obviously written in Mom-cursive with my name. For years I even saved that tiny card, wrapped inside the angel's body.

I used to be ashamed that the boy was so disgusted with me that he stayed home from school just to avoid giving me a gift. Now as a mother of boys, I wonder how I would have handled the situation, especially since I always joke that my sons will be like their father--not interested in girls until they turn 20.

In all this, I don't hold any ill-will toward the man the boy has become. And if that angel didn't sort of look like him from way back then, I probably would have long since thrown it in the trash.

And as I head upstairs to cuddle with Husband tonight, I'm very grateful that I didn't meet him until he was in college.
By Holly Michael, APR at January 03, 2012