When Farm Kids Make a Snowman

Earlier this week, a band of snow stopped over our farm and dumped at least seven inches. While Husband trudged outside to dig out the pigs, Ryan, Morgan and I packed up our snowman (and woman) supplies and headed outside. 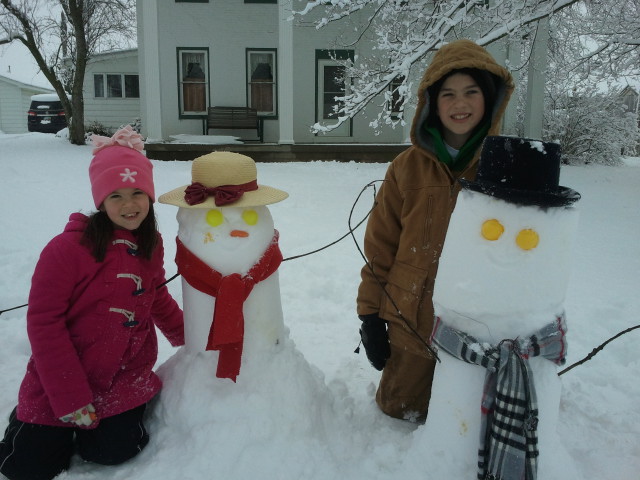 The yellow eyes were my idea--but not really. When I was gathering supplies, I thought it would be good to use the two halves of plastic eggs to make the eyes, so I ducked into the kids' playroom and grabbed green and blue eggs. What was I thinking?
Ryan and Justin use plastic eggs year-round as their pretend pigs on their pretend farms. They actually have a whole pretend farm economy that even includes hog shows and marketing. The blue and green eggs were their best ones, OF COURSE, according to Ryan, so he threw some new ones in the bag we were taking outside. So, yellow eyes.
We also used a bucket from the barn packed with snow to make their bodies. So that's not eczema on the snow woman's face, it's feed. 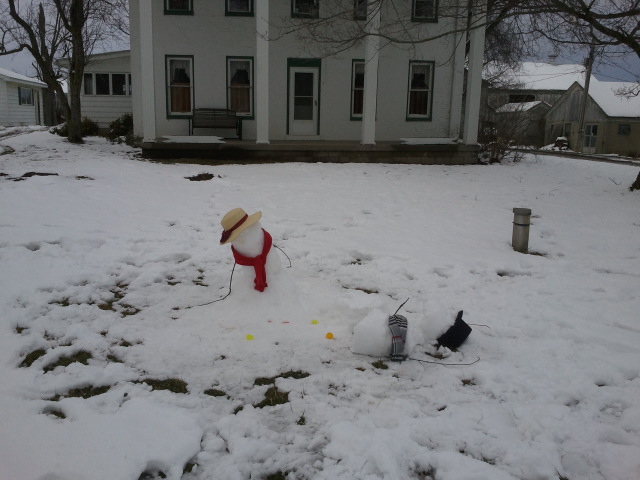 I tried to tell Husband about the yellow eyes and how ONLY our son would make me put back the blue egg and how ONLY our kids would get feed on their snowman, but translating things to him from farm experience to average person reality is nearly IMPOSSIBLE. And I ended up looking like the snow woman above. (And since Husband had been shoveling all day, he looked like the snowman by the end of our conversation.)

At least the soulless yellow eyes were gone.
By Holly Michael, APR at March 07, 2013