Welcome to the sequel to my smash hit and highly educational post: Hey, That's Not Hay.

Attention ignorant hayride riders the world over: THIS is hay. It is valuable cow food. No one would ever let you sit on it. 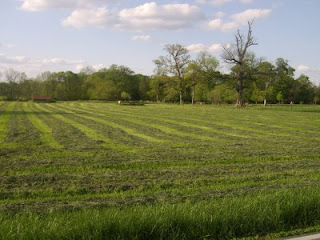 Actually, this is hay when it has just been mowed. (Is it necessary to say here that BEFORE being mowed, this area just looked like a grassy area--that needed to be mowed?) 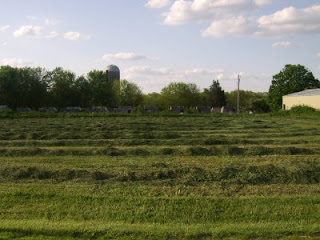 Oh, and look what we have here: hay that's been raked. This must be how it feels to work in Martha Stewart's kitchen--where the next major step in every process is magically complete and ready to show. Now I will share a view from my patented hay-cam, showing exactly what a piece of hay sees right before it is raked or fluffed or molested somehow by this machine. 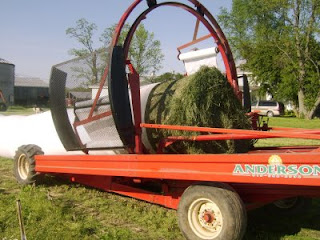 After the hay is mowed and raked, it is baled. Please note--and this is important--that hay can be baled in large round bales (called round bales) or in smaller square bales (commonly known as square bales). NEITHER KIND IS USED IN HAY RIDES. HOW MANY TIMES DO I HAVE TO TELL YOU?

We bale our hay mostly in round bales and use this cool hay-wrapper thingy (yes, that is the official name for it) to cover them, saving the hay from the ravages of weather and critters. Also, this machine is really cool for those hard-to-wrap gifts (just kidding). 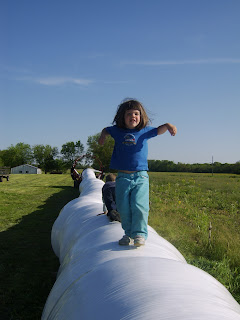 So now we have a giant tube of hay across from our house. I do want to point out something VERY COOL about our hay-wrapper thingy because you may be wondering how it pushes the hay bale through, especially since it is connected to this long and heavy hay tube. BUT the genius of this machine is that IT MOVES and the bale stays still.

See, the bale goes in and then the wrapper MOVES BACK as it wraps the bale, making way for a new one... Sorry, did I lose you? I just get so excited sometimes about the brilliant simplicity of farm machinery. 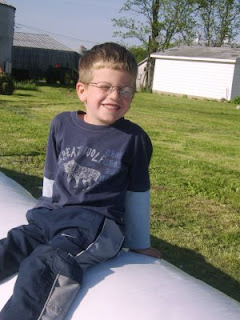 Anyway, we'll spend the rest of the summer baling hay. Well, not me, actually. I have a hay-less hay ride to plan.
By Holly Michael, APR at May 17, 2009