The Skunk Got Squashed, And There you Are

Until I met and married my husband, I had never watched an episode of Murder, She Wrote, Matlock or Columbo (although, this could be because I hadn't yet developed the TV habits of a 70 year-old widow.)

The cultural exchange on my side included introducing Husband to a song that he swore my family made up. If you know the title, you know half the chorus: Dead Skunk in the Middle of the Road.

Caught in that tricky era between record players (ours was broken) and the Internet, we were unable to share the full reality of the song until my brother found a novelty song CD in a sale bin.

Before you know it, Husband, and later, our son, were cruising down the highway belting out: It's dead, it's in the middle and it's stinking to high-high heav-van. 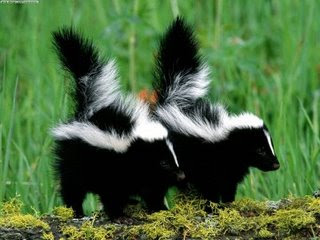 I'm not sure why this song is such an integral part of my family life that I needed to be sure that my husband could hum along. I mean, our family loved the novelty songs. No one could change clothes without someone shouting out Don't look Ethel.

But Dead Skunk was our song. I guess it had more sing-ability than The Streak and more applicability to life racing down country roads in the back of Mom's lemon-yellow station wagon than, say Yellow Polka Dot Bikini.

Whatever the reason, I'm happy to look back on a great childhood and the wonderful memories we have. I can only hope as a Mother that my children will also think of me and all the cultural references I shared with them, whenever they see roadkill.

P.S. I refrained from photographing the actual dead skunk at the end of our lane last week. Please do yourself a favor and never type in "dead skunk" in Google Images.
By Holly Michael, APR at May 22, 2009