Once upon a time there was a little girl named Morgan who had a cousin named K who lived on an island far, far away. One day K came to Morgan's farm to visit her. They rode bikes together, went to the "buzam" (museum) together, and dressed just alike. 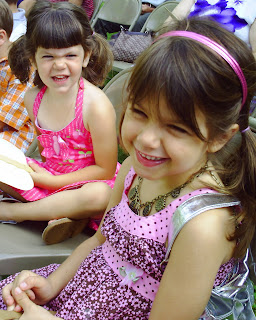 Morgan has been beside herself with excitement about the arrival of her cousin K. She just concluded her visit tonight and both girls cried--which could also be explained by the late hour and some driveway induced boo-boos. 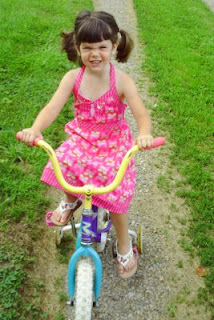 Both girls are a dangerous combination of sweetness and grit that had them both dressing up for church and then climbing on bikes to cruise the gravel driveway before we left. 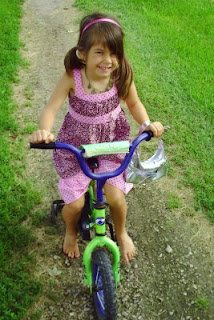 Once K decided that her uncle's church softball game warranted a cheerleading outfit, Morgan was happy to concur, leaving both girls to root for a perennial loser, poisonous nuts (buckeyes are poisonous, did you know?) and the local Presbyterian church. 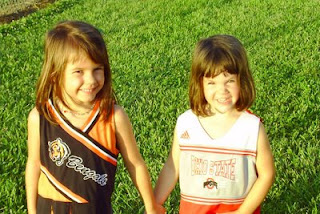 K is the subject of many bedtime stories and a role model who never says bad words, never bites her playmates and always wears panties to bed. Between our stories of her heroics and her fabricated virtues, K has been elevated to almost a legend at our house. I hate to say it but the in-person time they had this week may have been disappointing for Morgan--her hero turned out to be a very cute but very normal five-year-old girl.
Morgan and K will be reunited this fall at Disney World, where reservations are in order for them to dine with multiple Disney Princesses. The Princesses, who all live at the big castle, by the way, can take over as Morgan's heroes and K can go back to being what she should be--a wonderful friend.
By Holly Michael, APR at July 07, 2009