Gotta love my Aunt CS from Akron. She is the Queen of holiday family group photos, a humble health care worker like me, and she even takes time to clip and mail articles for her nephew-in-law (Husband) from the Akron Beacon Journal.

So, thanks to Aunt CS, it's time for another installment of Guy Reads, the exciting segment where I share with you the news items I (and Aunt CS) clip out of the paper for my husband.

Small town side note: when she lived around here, Aunt CS used to share rides to college with my father-in-law. Not knowing that many, many, many years later her niece would marry his son.

Anyway, she surprised us this week with a fascinating story out of Akron about the very rare Red Wattle pigs. They are known for their extremely unattractive under-chin wattles and dark meat. 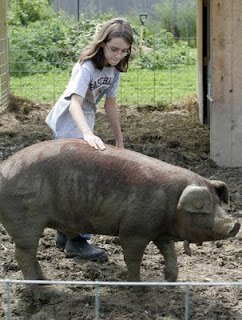 Photo: Ohio.com
A little additional research on my part shows that the Red Wattle is "critical" according to standards set by the American Livestock Breeds Conservancy This means that the breed has fewer than 200 annual registrations in the U.S. and estimated global population less than 2,000.

We know a little about rare breeds here on our farm, so we wish the young lady from Akron all the best.

We also know a little about fake cows here on our farm. That's why I was concerned to hear that the police in Akron have been hassling a kind man about his restaurant mascot, Cattlelena. Is that not the best name ever given to a fake cow?

Speaking of great names, the PR person in me just HAS to give it up to the forward-thinking geek at the Akron Beacon Journal who thought to register Ohio.com as their domain name. Some Akronite (Akronian?) back in 1995 really had their sh!t together, besides Aunt CS, that is.
By Holly Michael, APR at September 17, 2009