On the First Day of Job Loss, My Blogger Gave to Me...

By Holly Michael, APR September 20, 2009
Out of a job? Not sure what to do first? Check out my 10-day list of job search assignments. 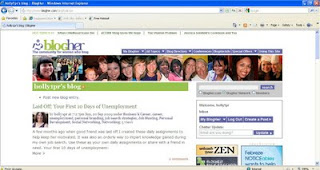 By Holly Michael, APR April 05, 2008
Last weekend, in a brief moment of remote control ownership, I tuned into basic cable and saw a very disturbing show called "Rich Bride, Poor Bride." I watched two episodes and didn't see what I would call a "poor" bride--although actually, after they blew their budgets, both brides probably did end up poor. One couple spent about $75,000. They talked her out of having live peacocks at the reception. That makes me think about my own much simpler but very nice-for- Farmersville wedding over a decade ago. In many ways it was a disaster. We were engaged for a year and a half; we had plenty of time to plan but fates conspired against us. By the time we got to the week of the wedding, we had buried two people on the guest list and paid our respects to a distant uncle. One of the people we lost was my husband's grandfather who died Monday, we had visitation Wednesday, funeral Thursday, rehearsal dinner Friday, wedding Saturday. How his grandmother handled
4 comments
Read more

By Holly Michael, APR September 23, 2010
Good gravy (I have taken up saying this since Husband doesn't curse and I was the only one to blame for our household's junior potty mouths), it's Fall. And I still haven't shown you the before/during/after pictures of my kitchen update. Before : greenish "marble" laminate counters with a yellowed fluorescent light cover--only one bulb working. Carbon dating and a close examination of the many knife cuts evident on the laminate surface have led scientists to believe these counter tops date to the early Aquarius period or possibly late Happy Days epoch. To save money on the almost airline-like add-ons involved in having a big box home improvement chain do this project, we removed the counter tops ourselves. I use the term ourselves very loosely, of course, in that Husband did it. I thought we were well-prepared. Fortunately, they did not have a box on their billing slip for We Pulled out the Oven and OMGOMGOMG!! The workers even kindly looked away while I
59 comments
Read more

By Holly Michael, APR April 18, 2010
I haven't been at my current job long enough yet, apparently, because people still make the mistake of asking me what are you doing this weekend? I say that it is a mistake to ask me about my weekend plans because that question is supposed to be followed with an ordinary answer like going to see a movie or yardwork. But when you ask me about my weekend plans, you're likely to get an answer like this: well, we'll be pretty busy getting ready for our pig auction. Husband has to give haircuts to 100+ pigs. Yes, you read that right. Pigs get haircuts. Husband is grooming them for the pig auction (we call it a sale) that we are having on Saturday. In the market for a pig? Head over here . Pigs have short, coarse hair that in days of old was used to make brushes (and maybe still today). Husband and other pig farmers clip the hair of the pigs shorter to make them look more appealing to potential buyers, who in this case are 4-H kids and parents looking for a hog to take to th
8 comments
Read more