I have a confession to make. I like pigs.
I know this doesn't seem like much of a confession from a woman who has breastfed a baby in a (empty) pig pen at the Indiana State Fair, but actually it is. Early on in my marriage to a pig farmer, I knew that if I let on about liking pigs they would be everywhere. Pig towels, pig knick knacks, pigs in the kitchen, pigs in the bathroom, pigs everywhere. So I let on like I wasn't wild about pigs, which kept the pig gifts to a manageable minimum. Yes, some people gave me pigs whether they thought I liked them or not. Either they were on to me--or they just didn't care. 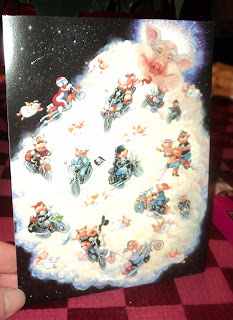 Today, I got a pig birthday card from my aunt in-law in New York. It shows hog heaven. Get it, hog heaven, which apparently consists of pig angels, hogs riding hogs, and a pig-like deity overseeing it all. It's a cute card and now that I've confessed to liking pigs--it won't be the last.

My in-laws are proud pig farmers and collectors of all things pig. They were very pleased to have found these cute chocolates from a British chocolatier featuring cheeky piggies to place in Husband's Christmas stocking. As a guy, it's always been safe for him to admit to liking pigs, although he did get a good luck three-legged pig from my mother this year. Apparently, in the world of knick knacks, three legs is much cuter than it would be in real life--where missing a leg would certainly NOT make you a lucky pig.

With this confession made,  now I can safely snack on the Yorkshire-looking pink chocolate pig and display my birthday card. But don't even think about getting me a calendar featuring 365 days of whiskers and his ball of yarn; my feeling about cats is not subject to change.
By Holly Michael, APR at December 27, 2010