On Tuesday, the WHIO-TV Facebook page temporarily posted, a bomb will go off at 9:30. This left people in the area panicked for several whole seconds that a.) someone had hacked the WHIO-TV Facebook account or b.)  We had like ten hours to figure out where there was going to be a bomb.

In the moments before WHIO deleted the post and offered an apology, the post earned 54 comments consisting largely of WTF and, oddly, two likes. But even after repeated apologies and explanations that they accidentally hit return while writing a post about a bomb scare at a local school, WHIO continued to get posts on their wall by people complaining about the misstep. WHIO Facebook followers were incensed that they, for a few seconds, thought they might have ten hours to worry about a bomb--the fact that there was an actual bomb threat to a school with actual children seemed to be lost on them.
However, this bust of a bomb post pales in comparison to the debacle caused by Germantown resident and rogue Reese Witherspoon quoter, Emily Berry, who nearly wrecked the serenity of this quaint village with her Facebook abomination. 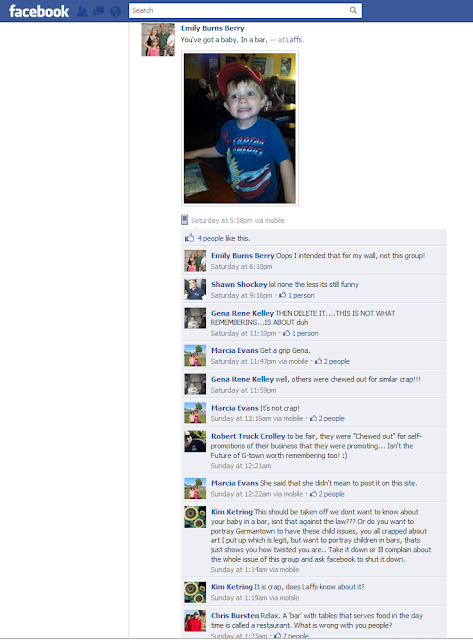 Emily tore the town in two by accidentally posting on the Remembering Germantown When... Facebook group thingy NOT a memory but a cute photo of her son IN. A. BAR.  And like a scene out of Footloose or perhaps the internet version of Harper Valley PTA, the locals attacked.

How could she have waited an entire 12 minutes to apologize and note she couldn't delete the post from her phone. How could she!

Her son, her Sweet Home Alabama quote and her Uncle Paul helped drive a record 79 comments over a three-day argue, bitch, misinterpretation and glad-I-left-Germantown palooza of laughable garbage with no end in sight.

Let he who is without Facebook sin...
Now, let's sit back and take a lesson from this.  If you accidentally mistype a post and it takes you seconds to fix it OR you post accidentally on the wrong spot and mobile technology doesn't allow you to fix it right away--then you are the scourge of humanity. (?)

The problem with this line of unforgiving heckling is this: we are all one or two clicks away from being the next Facebook debacle. It could happen to anyone.

We share our lives online. We have made Facebook our glass house. Let he who is without Facebook error, cast the first stone.
By Holly Michael, APR at October 11, 2011