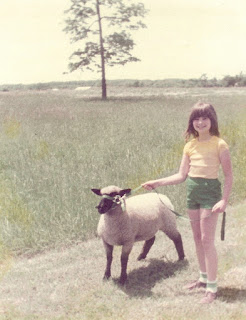 Nearly 30 days ago we finished the county fair and I have YET to thrill you with the full report. But before I delve into that ancient history, I thought it would be fun to see a few photos of ANCIENT history. No, I'm not talking about Husband's 80s hair again. This time the short shorts and bad hairdo is on me.
I didn't grow up on a farm but I did live in the country, witness all the wide open space beyond our circa 1983 back yard. My first year in 4-H, I showed two sheep, Buckwheat and Alfalfa, named for the stars of the Little Rascals TV show popular in the 1950s (yikes).
My father built a sheep pen out of old pieces of mismatched fencing he dug up at my grandfather's farm and built a shelter out of some old garage doors. Image an igloo made out of garage door with tar paper nailed around to cover the hinge gaps. It was classy. We thought it was wonderful. 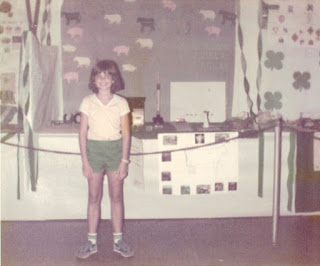 Much like my kids today, I was an eager little 4-H member. Here I am at the fair with our 4-H booth. Apparently, in 1983, I owned only yellow shirts and green shorts.

Our kids are the fourth generation of both our families to pack up some pigs, sheep or cattle and have the time of their lives at the county fair. So it makes me proud and a little nostalgic to think back on this year and all the many years we've been doing this. 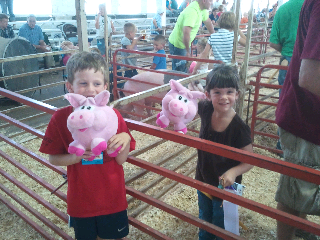 And the kids are making us so proud. Here's Justin and Morgan who both earned stuffed pigs in their respective pee-wee showmanship classes. 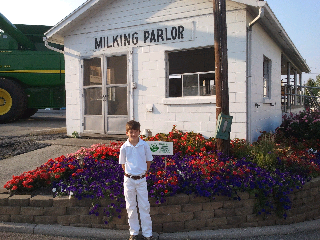 Ryan in his second year of 4-H won champion with his ewe (female sheep), champion Ayrshire heifer (young female dairy cow) and champion in his age group for swine showmanship. He even won Best of Show for his decorated cupcakes. More champions than I had in my entire 10-year 4-H career. Some day they'll look at these photos and wonder why we let them dress this way and what did we do to their hair. But they'll also have a good work ethic and experience with facing competition (the kind where not everyone gets a trophy). And they'll have a place they can go to remember their childhood, long after the garage-door sheep pen has been torn down.
By Holly Michael, APR at October 10, 2011