The Valley Recap: All the Cool Kids are Doing It (S1:E4)

Welcome back! If you missed my first, second or third reviews of The Valley, be sure to check them out.

TheValley is a Dayton-produced reality show that occasionally actually films in Dayton and airs Sunday nights on Dayton's CW. Apparently, each of these six high school students has "something to prove."

Last episode we learned that Nathan is able to leave the hole in the center of Ohio that is DeGraff to visit Kings Island multiple times a year BUT was not able to visit the University of Cincinnati before making the life-changing decision to enroll there. Also, Alexys’s Daddy has a wonderful mansion condo on the Ohio River with a pool.

Theme song: “Do you have what it takes?” To watch this show another time? To stomach through the manufactured teen girl drama? To overcome your (OK, may just my) extreme annoyance at Nathan from last episode?

First adventure: The Precinct – carried over from last episode
Alexys’s Daddy had taken them all to a swanky Cincinnati restaurant on a party bus. The scene picks up with an awkward exchange where Stephanie is questioning Alexys about her “perfect” boyfriend and if he has ever cheated on her.

Lots of reality-show type interviews about this with the cast. I am too old to understand or care. At least Chris did say how appreciative he was to be “treated like a rock star” by Alexys’s Dad.

Second adventure: Dairy Dream
Because this show needs to fill 24 minutes each week, Nathan invites Stephanie to ice cream to talk MORE about Alexys and how awkward it was at the dinner.

Third adventure: Fifth Third Field, Dayton Dragons game
They are all at the game to do some mystery thing on the field. Nathan has anxiety issues. Oh, they are the Human Dot Race: Donald + Ally, Alexys + Nathan, Stephanie + Chris. Alexys and Nathan are out to win it but keep falling.

Afterward the scuttlebutt is that Alexys kept telling people, “look what I had to deal with.”

Third adventure: El Meson restaurant
Because this show still has time to fill and perhaps a sponsorship obligation, Chris, Ally and Stephanie get together to talk AGAIN about the drama with Alexys. Stephanie reads a text out loud.

Fourth adventure: WDTN studio
OK, this is meta. The show taped a meeting with Chris and the producers about what Chris wants to do on this very show. And then used it in the show. 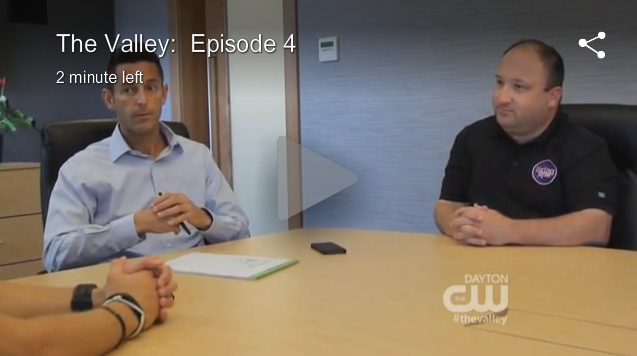 Like many kids, Chris believes he is the first teen to ever face a tragedy and he has some deep thoughts and writings he wants to share. Not to make light, but Chris losing his football coach to drunk driving is slightly less of a tragic tale when you know (not that this was shared on the show) that the coach was drunk and killed another man.

Anyway, he has decided that his thing to “prove” on this show is how much he wants to spread the word about the dangers of drunk driving. Of course, “kids are obviously still going to drink, there’s nothing we can do about that.”

So apparently his message is this: Hey high school kids, I know you are gonna break the law and all with your underage drinking, but don’t be dumb and drive afterward. I mean, you could drive the wrong way on the interstate and kill someone, just like my high school coach and role model.

He then gets in front of a very “down with it” backdrop, turns the camera to black and white and shoots the lamest public service announcement ever. (Too bad he didn’t say what I wrote above, that would have been AWESOME.) The PSA is so lame that it even references a URL that doesn't work and when you do navigate to the intended page is really just a place for schools and communities to download student education programs, although alcohol and substance abuse are included. 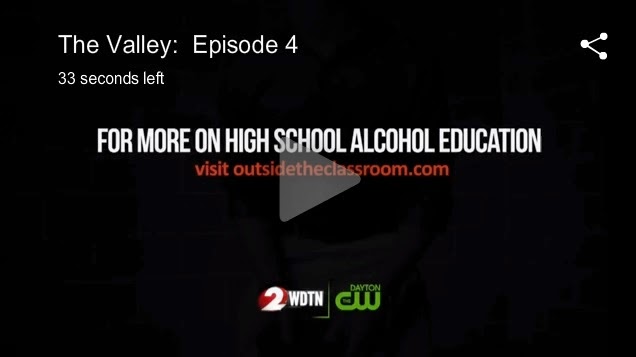 Sorry to be such a downer, but I don’t subscribe to the whole, “kids are gonna drink, so what can we do?” approach. Children in high school should not be drinking and the only way it happens is when adults look the other way. I think it is irresponsible of The Valley to support that line of thinking.

One last thing, this show would NEVER show its stars riding bicycles without helmets or driving a car without a seat belt or violating any other politically correct and legally required safety regulation. So why in the hell would they allow a teen to imply that since he and all the other cool kids are already drinking-it-up, they should all be sure to just get a designated driver?

On a positive final note, after making a mockery of their promos that said this is the only reality show shot in Dayton (HA!), they actually did seem to shoot most of this episode downtown and in our nicer suburbs.
By Holly1Michael at October 05, 2014