Welcome back to the Internet's one and only Swine Lecture Series. Today we'll cover the basic breeds of hogs.

Every species of animals that includes registered breeds, whether that's dogs, horses, or Big Ten football fans, has non-negotiable breed characteristics. For most animals, breed characteristics include size, coat color and texture, attitude, plus the desire to wear necklaces made out of poisonous nuts and spell the state name during gibberish songs.

For pigs, breed characteristics include color (their hair is clear, so all coloring comes from the skin), color markings (spots, belt, contrast on face and legs) and the direction their ears point (pointy and alert vs. hanging down over the eyes).

The National Swine Registry, the AKC of pigs, oversees the main breeds of hogs, Yorkshire, Hampshire, Duroc and Landrace. But there are other breeds that are less populous and don't feature class sizes of 500; think of them as the Mid-American Conference of pigs.

For example, there are the Berkshires, mostly black pigs with white noses and white "socks" on four legs. The Berkshire breeders have admirably attempted to market their product as the "Angus Beef" of pork.

You don't see them that often, but many state fairs have a show for purebred Tamworth hogs. Tamworth's are known for their pointy snouts and WILD nature. Years ago hogs were mainly raised outside in lots where tough, rangy hogs survived best and the Tamworth's remain a throwback to that era.

Speaking of hogs that are rare or unpopular (depending on who you ask), our farm raises Hereford hogs, in addition to our main herd of State Fair-winning Yorkshires and Hampshires. 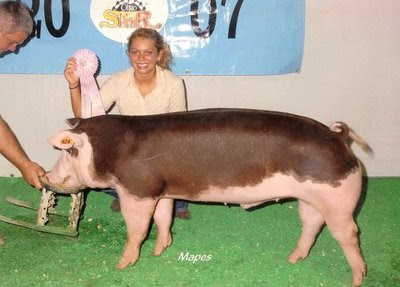 Years ago, when we were young and ambitious (foolish?), my husband and I would load up a trailer or two of purebred hogs and stay for about a week at the Ohio State Fair. The year our son was born, I was still on maternity leave during the fair, so we thought it would be fun to show LOTS of pigs. So we loaded up our Yorkshires, Hampshires and Herefords, plus our eight-week-old baby and headed to Columbus. We did pretty well, winning champions with all three breeds. 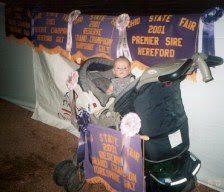 We had a lot of help from our family showing most of the hogs, but when it came time to show our Herefords that year, everyone had left, leaving us with no one to watch our baby while we showed. Luckily the kind women who worked in the swine barn office were more than willing to hold our little guy.

Which brings me to the final point about purebred hogs. The best aspect to being part of the purebred hog community (everyone has a "community" these days) is the people. People like us who keep coolers of pig semen in their kitchen, people who fill their magazine racks with boar catalogs, people who know more about the genealogy of their herd than the names of their cousins, people known for their hard work and integrity--they make up a rare breed, indeed.